Death of the American Space Program, but not my imagination.

Listening to NPR this morning, I was so disappointed to hear of the retirement of the US Space Shuttle Discovery. I became slightly angry at the idea that we were "giving up" on space. Though we are learning new information about our universe every day, our space program is just not what it used to be. According to NASA's schedule there are frequent launches (every few months) to the space station to restock and send new technologies, but what about our big giant plans to reach the end of our solar system? The Discovery was responsible for launching the Hubble Space Telescope in 1990, WHAMMY! Eleven years ago! The year Nelson Mandela was released from prison in South Africa, the year of the Exxon Valdez oil spill, the year the World Health Organization removed homosexuality from its list of diseases, the year the Gulf War began in Kuwait, I was 13 years old. It seem like forever ago doesn't it? It's because it was.

We understand that there is risk involved with space travel, but what NASA doesn't is that we care less about materials they design for NIKE shoes and more about our origination and how we got here. I believe some of those answers might be in space. There most likely is other life in space; in other forms, based on unknown elements. As a child, I would gawk at my father's newspaper article from July 21st, 1969, the front page adorning a picture of a man standing on the moon, which is sitting in a plastic sleeve somewhere buried in the eternal pits of the garage. I hope we haven't lost the wonder, excitement, and awe of space. Even now I have stars in my eyes, and remember a time where I would sleep outside in the country with no light pollution and gaze at the millions of stars above me, my heart would stop every time I saw a 'shooting star.'

I will continue to watch programs on the science channels, and go about my merry ways, but I will never forget to LOOK UP. That's all it takes to spark the imagination, when it's dark, no matter where you, just look up, even for just a few moments. I wish there was more I could do to encourage advances in science, but all i can do is encourage you to encourage others, and hope that we start a trend, hope that we become more aware of our surroundings, and hope that someday the excitement for space travel returns to our society as it was in the earlier years.

When designing new creatures, I keep in mind that things elsewhere might be very different from those familiar to us, they most likely are not in the form of the humanoid figure in the drawing below. I do like to play with known textures and explore them further and how they might relate to other kinds of figures (a good example in my first blog post). This is a drawing done in a short period of time in Prismacolor pencil with no under-drawing. I was experimenting with texture and studying the skin and dynamic camouflage capabilities of the octopus while allowing myself to play freely with color. 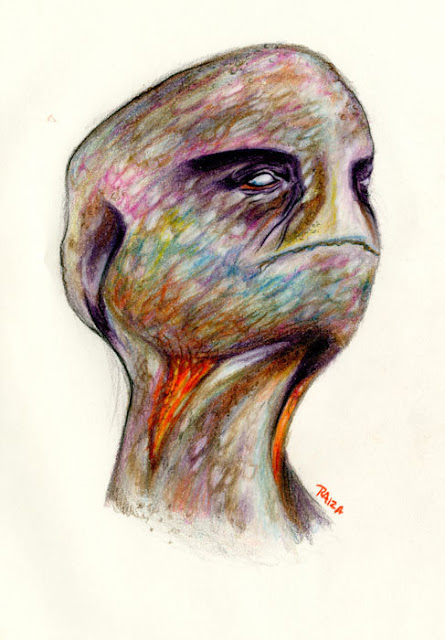 Why is it so hard to force myself to sketch when it is the single most helpful exercise for my art? If you feel like you have to twist your own arm to sit down and commit time to sketching, you are NOT alone!
I discovered last night I get so lost in sketching that I lose track of time. I am trying my hardest to look at it as a much needed escape, but it is tough to convince myself of this when I end up restricting my sleep to three hours a night and wake up early for the day j.o.b.
I've been thinking of ways to fix this, to work around the agony of the initial commitment to sketch. The best way I've found to do this, is "don't put it off."
At the first moment of idle time, don't think about it, just grab your ipod, your sketchbook, and GO. Once you get the creative flow going, you will most likely have finished your sketch sesh before you realize that a few hours have gone by and you didn't waste time dragging your feet. Next thing you know, scheduled bedtime! VOILA!


Here is a sketch I was working on last night. I'm calling it 'Warrior' for a concept of a small oil painting I want to experiment with. You'll notice that many of my drawings, sketches especially, do not have a whole lot of line work in them. I have trouble seeing forms in lines, I interpret shadows as shapes and block everything in that way to get proper proportions. Haven't quite figured out why my brain works this way, or if I will or should "correct" this; it seems peculiar to me but it is the way my eyes have always interpreted things. 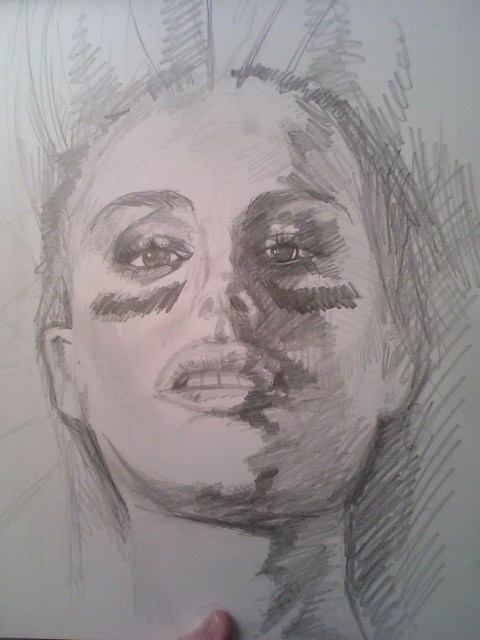 Yesterday, an important announcement came from Apple CEO, Steve Jobs; he is taking another medical leave of absence. His first being in 2009 for a liver transplant (in which stocks plummeted from $300 a share down to $80 a share). Though this might be a great time to buy stock in Apple, it reminds us that even Steve Jobs is human. At our greatest, we might feel like we are super heroes, but life is just way too short.

I've been sick for a few weeks now, I know what it's like to have been 'kicked down a notch.' I'm lacking focus and creativity, and though the mind is a powerful thing, a toll taken on the body can be wearing. Someone once told me to wear sunscreen, but really, I think Vitamin C is pretty damn important. If you haven't gotten sick yet, then I'll let you share my straw. Here, no really, have some Diet Dr.Pepper, it's delicious!

Speaking of death... here's a new drawing of mine. I might need to come up with a new term for "drawing from life," because believe it or not, that's what this is. 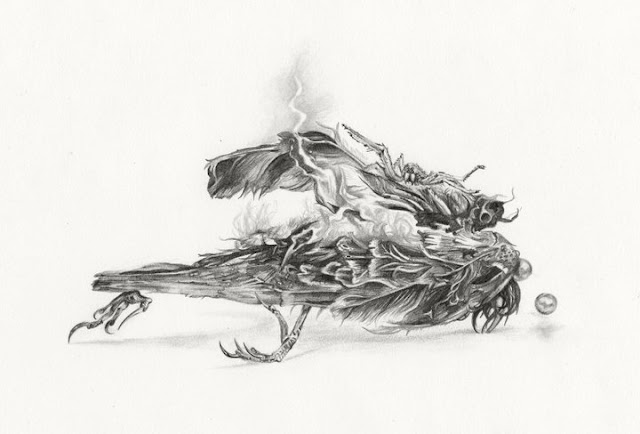 This is a New Year. *complete with zombies*

First and foremost, I'd like to wish everyone a Happy New Year! I have had plenty of time to think about the makings of this blog as you can see from the timestamp of my last posting. After having several, upon many, revelations I have 'lightbulbed' that this journal will also be a personal blog of sorts.
The internet has become a wonderful place for me to connect and interact with other artists and industry people, and while my perspective of the world is constantly evolving with the influence of these people, I will share new things with you; whether they be personal thoughts or new works of mine.

I forsee 2011 being a big year for us all. As miniscule as I believe the importance of human existence to be relative to our planet, I still selfishly enjoy every passing day. I hope that this year we all make leaps and bounds towards becoming a better people as a whole, and I encourage everyone to try and be a bit more kind and ruthless. Though these may sound to be an oxymoron, they are not. We must appreciate life in all its forms, things and people around us, while being ruthless in our step towards being successful, conscious, and aware.

I was recently challenged to compose a self-portrait. I haven't done a self-portrait in a REALLY long time.
Ready for the apocolypse or not, if it is at the hands of humans, youbetcherass there will be a zombie outbreak somewhere. AMC's recent tv show The Walking Dead showcased zombies in a new light, seemingly, as former people. Wives, children, neighbors, people you know, will turn in to zombies if the aren't already.
Full Prismacolor Colored Pencil, this drawing is of myself as a zombie. Friends and foes alike, I hope you remember me this way and not dressed as Old Greg or asleep with my thumb in my mouth. Enjoy! 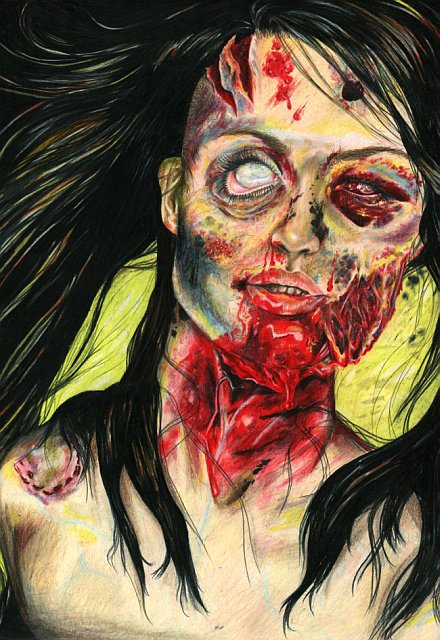 Posted by Cody Raiza at 3:33 PM No comments: